Sorry, heard Eminem a few hours ago and “please stand up” is echoing around my brain…

One of my favorite bloggers is Harold Jarche. I’ve been reading his blog for the past year or so and it’s one of the few that I always make the time to read. I initially began to read it because my first blog was call Life in Permanent Beta so I thought we may have things in common – kismet, synchronicity, maybe. I was right and wrong. We do share many common interests but unlike me he actually understands Cynefin. He’s way ahead of me in so many areas lol. Anyway, his latest post has struck a chord.

In the post he suggests asking prospective employees a set of questions around how they manage their learning. I think this is great idea and is something I’ve been doing for a number of years. Learning is kinda my “thing” so I make room for questions about learning in interviews and include it in performance reviews (when I have to do them, not my fave way to go) and of course I promote workplace learning in all its many forms.

One of my first attempts at promoting narrated learning at work was in 2004ish when I talked my employer into letting us use the then obscure Moodle platform as an intranet. The idea was to provide the space for staff and volunteers to create their own online portfolio of what they learned and examples of how they used that in practice. Keeping in mind that many people still didn’t have email addresses at that time… well lets just say it failed quickly. I won’t even go into the wiki experiment :-/

So when I read Mr. Jarche’s narrations of his work and learning, I get it, I love it, I applaud it. However, in my corner of my first world country, I’m still not seeing it in the workplace. I see it online, a lot, but not in place-based work environments.

In his latest post Harold suggests a great list of questions to ask at a job interview beginning with, “What can you do for the organization today? Tell us about your PKM.” In my world I usually begin with, “Do you have an email address?”

How many people use network technology to network?

One of the things we forget – we being those of us who have embraced technology – is that almost half of the folks in Canada and the US have not… embraced it that is. 50% of people over 16 are on Facebook. Outstanding! 50% are not. 30% of businesses use Twitter/ Foursquare/ LinkedIn. Fantastic! 70% do not. I can attest that in smaller communities of say 100K or less the numbers of social media users is even smaller. I am a Foursquare mayor of at least a half dozen local gas stations and cafes and all it has gotten me is strange looks. A recent HBR post reports the following stats:

50% of the population currently uses Facebook, and more than 37% use Twitter. Yet among Fortune 500 CEOs, the report says, only 7.6% are present on Facebook, only 4% use Twitter, and less than 1% use Google Plus. LinkedIn is the only social network where CEOs are slightly ahead of the general populace, the study concludes: Twenty-six percent of CEOs surveyed use LinkedIn, compared to 20.15% of the population at large.

So you may be thinking that I must work in a field that is comprised of non-professionals. Not so. I have a couple of official jobs and volunteer positions and all put me in direct contact with professional types. I am a health manager for four First Nations communities, I blog for a tech start up and I am on the board of a non-profit. Let’s unpack the PKM and real technological use of each of these.

I contributed to the communication toolkit for the First Nation Health Council’s Community Engagement Hubs. I have to say that the First Nations Health Council and the Interim First Nations Health Authority are perhaps the most transparent and forward-thinking organization I have ever worked with. They have embraced social media and networked approaches right from the beginning. However, this is not a reflection of how the rest of the varied Aboriginal populations in BC work. Many First Nations communities do not have stable internet connections. I work in the Fraser Canyon and I can say for certain that there are days, and sometimes weeks, where my office has no internet and at times no phone connection. And that’s only a couple of hours outside of Vancouver. Beautiful and rugged terrain with a sparse population has a price.

In these areas, where connectivity is inconsistent and slow people have not adopted the use of the internet, never mind developing a PKM strategy outside of their immediate family. I currently have several very professional staff who do not have email… at all. My weekly sharing of what I learned this week (I narrate everything) always has a subject line that says “PRINT THIS FOR….”. This makes sense. Why would you adopt something you can’t access consistently.

The other side of this is that many First Nations communities and individual do have access and in fact were early adopters of technology. There is digital divide and there is an addition digital divide within communities. Some of this is due to connectivity challenges and some id due to socio-economics. Poor people, and Aboriginal folks lead the pack in the low income race, may have access to technology but it’s not easy access. There are barriers. Many, many barriers. That lack of access means low familiarity and until you get to the point where you are comfortable in the environment you are not likely to move into advanced use like using technology to grow a PLN.

I love coders. They are a special group and I admire their collective ability to understand all that… code stuff. I can manage “Hello World” but that’s about it. Thank you WordPress and WYSIWYG editors! Coders do not blog. Coders do not read blogs. Coders do not partake in Twitter, Facebook, LinkedIn (unless you beg them to put up a profile so your company looks like it really does have staff). I know some do, most don’t.

They do narrate their work for other coders but it’s not the kind of narration of work we are talking about here. There is no associated introspection around how this or that particular line of code made them feel or how it will change the world.. unless they are writing code for a game.. different story there… Many do use their own niche social networks like message boards to get help with problems or support others with work related challenges but not in the way we think of as networked learning.

Same for graphic artists and other creative types. This is not a blanket statement based on fact, more of an observation. I know a lot of computer programmers, graphic artists and other creative types. Many game, few Tweet. If they use the internet away from work at all, it’s for pleasure, not for learning. When they use it for learning at work, it’s with surgical precision. Maybe it seems like they rule the social media space because the ones that are networking online do it really, really well. We all listen to them and the quality of their sharing makes it seem “as if” all technocrats frequent the online world that we think of as PLEs.

Oh dear, board members, please check your email more than once a week. Please wake up to the potential of sharing your ideas, successes and challenges in an open, networked environment.

This week I received several really interesting emails about learning opportunities for and by non-profits. Not a single one included an easy way to share the information. What I got was a pdf poster attached to an email. (insert really long drawn out sigh here).

Again, some NPOs are brilliant at social media, social networking online, building capacity by narrating their work. yada, yada, yada.. and many are not. I sit on one board of 10 people with a support person and an executive director and not a single one uses Twitter or LinkedIn. Two do use Facebook but that is a recent adoption for them. None blog or read blogs and most have no idea what a blog is. Unbelievably the Facebook page I set up for them has a growing list of page Likes and is proving to be really useful .They are “getting” Facebook but are miles away from really understanding the value of a PKE, PKN or PKM. What makes that ok is that so are the majority of people.

Where are we on the adoption of innovation curve?

I am not sure but I suspect that we are not nearly as far along as we think we are. Those at the bleeding edge have a perspective not shared by the majority. Lee Smallwood (@leesmallwood on Twitter) explains this best on his blog by sharing the two graphics below. 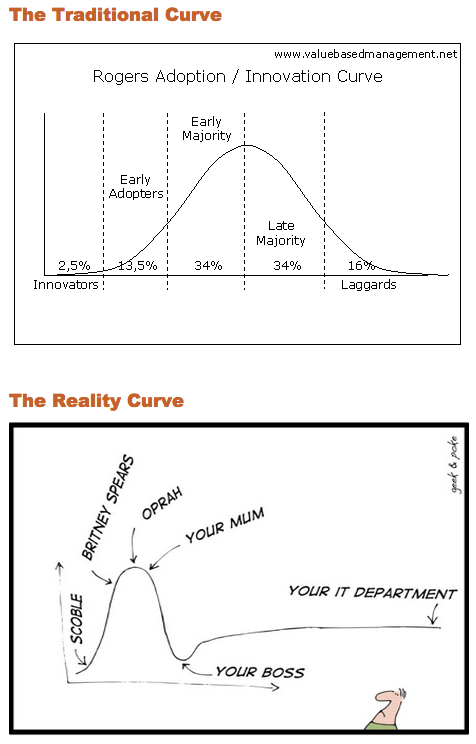 So, I’m a little envious of companies and organizations that can ask those kinds of question now. “Show me your wirearchy“, will no doubt be part of a future interview, which will probably not be face to face. We aren’t there yet. I hope we get there soon.